Pastor Mark comes from a “hands-on” background.  Ordained by Shiloh in 2009, he and his family served as missionaries in Mexico with Fishers of Men Ministries for just over two years.  He returned to Shiloh in January 2012 as Shiloh’s first associate pastor.

Pastor Mark grew up in Washington, Indiana, attended Hanover College and St Louis Community College where he earned an Associate’s Degree in Automotive Technology (1989).  After working several years in the automotive field Pastor Mark felt the call on his life to full-time ministry and returned to college.  In 2009 he earned a Bachelor's of Arts in Bible and Ministry from Bethel College in Mishawaka, Indiana.

He enjoys ministering in creative ways and encouraging the people of Shiloh to reach out into the community and the world.  He is also involved with Cass County Habitat for Humanity, serving on the board as chaplain and volunteering as labor.  Pastor Mark enjoys reaching out to others on short-term mission trips.  Some of his favorite getaways are construction-related mission trips.

Pastor Mark and his wife, Lucy, have two grown children, Aaron and Joanna. Lucy (Sell) Marshall is a Logansport native, having grown up in rural Cass County. She works at Pioneer Elementary as a Teacher's Aide. They enjoy walking, camping, and relaxing together. Pastor Mark spends his spare time working on home improvement projects or other repairs.

Pastor Mark loves to work with the people of the congregation, helping them discover and follow the plans God has for their lives.  He is interested in the spiritual growth of the congregation as well as each individual's relationship with Jesus. 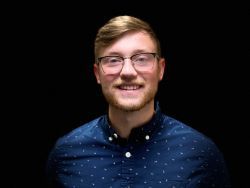 Pastor Nick came to Shiloh in June of 2020 to fulfill the role of the Associate Pastor. Before his time at Shiloh, Nick served as a Youth Director at Sonlight Wesleyan Church in his hometown of Bluffton, Indiana.

Nick gave his life to Christ and received a call to full-time ministry during his sophomore year of High School. Since then, he has been diligent in the calling that has been placed on his life. He went on to further study at Grace College and Theological Seminary and in May received his Bachelor of Science degree in Youth Ministry from Grace College and as of July will also have received his Master of Arts degree in Local Church Ministry.

Pastor Nick’s primary roles are to serve the Youth of Shiloh, the rest of the congregation, and the local community. Nick has a desire for creative and outgoing ministry that is intergenerational and impactful for the kingdom of God. For Nick, this requires prayer, a mindset that is mission-orientated, a team, and the heart-felt desire to serve the Lord.

Pastor Nick met his wife Marissa, who grew up in the Columbia City area, during his time at Grace College. Marissa also graduated from Grace College with her Bachelor's and Master’s degrees in 2018. Nick and Marissa were married on May 23rd, 2020 during the midst of the COVID-19 Pandemic. They both eagerly desire to serve the Lord through their marriage, the ministries they serve, and in their community.

Nick and Marissa enjoy spending quality time with each other through many activities that range from praying with each other, watching Netflix, and riding roller coasters.

Pastor Nick is excited and eager to serve the Shiloh congregation and the local community. He is ready to see what God has planned for the members of Shiloh Christian Church and the surrounding community.  One of Pastor Nick’s favorites verses comes from Matthew 28:19-20 where Jesus gives the Disciples and the Church the Great CO-mission.